Start a Wiki
Ace is a HTF Fanon character.

Ace is a red, blue-footed booby with orange arms and brown googles. He is a very happy go lucky character and tends to talk alot. He is also obsessed with flying, despite the fact that he cannot fly well.

Ace will often try to fly and will go to many lengths to do so, including stealing a plane or messing with dangerous chemicals. Ace also has many friends but he tends to hate or at least envy other bird characters and Splendid. In more recent episodes, Ace is also shown to own a plane, but for one reason or another, somethings tends to happen to that plane, making it impossible to fly, often while its being flown though.

Besides flying, Ace also has an interest in another thing, the ocean. When his plane is working, he likes to fly it over the ocean and when his plane isn't working he can sometimes just be seen hanging out at the beach. Despite his fondness of the ocean, Ace is unable to swim just like he can't fly and will sink quickly in water. Unlike with flying, Ace won't steal things in order to swim.

Ace's death will often include things that can fly such as planes, or other birds, along with heights and sharp objects. 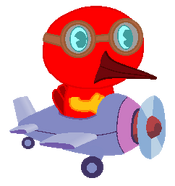 Retrieved from "https://happytreefanon.fandom.com/wiki/Ace?oldid=381415"
Community content is available under CC-BY-SA unless otherwise noted.