The poetry of wildness will always be there.

Aisya is a character of HTFF.

Aisya is a khaki/brown Okapi who really loves and stays with the nature, mostly towards animals. She has a brown hair with a braid, wears a black headband with a brown leaf tied into it and also wears a huge brown leaf as her cloth. The marks on her face also resemble face paint.

Aisya, strongly loves the wildlife around her and seems lived inside the forest. She actually very active and adventurous person and never cares about the danger from the forest sometimes. Due her wildlife culture, she seems take cares and protective towards every animals, even the dangerous one.

Even though she lives inside the forest, Aisya always seen at the town(always stay where there's some trees) and sometimes searching for birds and insects. She also seems enjoys playing with leaves and trees. She kinda friendly to someone and likes to show her wildlife culture. She also an animal whisperer. All animals become nice and tame when she interacts with them. She also kinda protective towards animals but the animals are actually protect her.

The main problem with Aisya is the danger she brought from the forest and also her culture. She will not understand anything about modern things and always mistaking and misuse it to something she do in the forest. This always mess things up easily, mostly leads to injuries and deaths. The wild animals(mostly insects and birds) also follow her sometime. 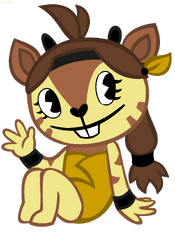 Retrieved from "https://happytreefanon.fandom.com/wiki/Aisya?oldid=352977"
Community content is available under CC-BY-SA unless otherwise noted.