Not to be confused with Alex, Alex and Daryl, or Alex g.

Alex is a fan-made Happy Tree Friends character created by Discord, DeviantART, and YouTube user Alexworld. He is the best friend of Flippy.

Alex was a relatively unknown resident of Happy Tree Town for a few years. Not much is known about him during this time, but it is theorized that he lived in a basement for a while, being taken care of by another blue fox, the likes of whom now being deceased. A few years after Lammy moved into town, Alex finally resurfaced, becoming a permanent resident of Happy Tree Town.

Alex is a blue ribbon-colored fox with a pink heart-shaped nose, like most of the other Happy Tree Friends. He is most commonly seen donning a mine shaft-colored hoodie and grey circular-frame glasses, both of which he only takes off when relaxing or sleeping. He has a bright turquoise belly marking on his torso, as well as inside markings of the same color in his ears. He also has a blue ribbon-colored tail, with a bright turquoise mark at the end of it. His ears also have chunks missing from them.

Alex is a happy-go-lucky character, who loves to draw and paint for others. He usually makes paintings as gifts for characters, only occasionally grabbing a different type of gift such as a rose. If he does this, it means he really trusts the character. He seems to have a fondness for chocolate milk, as he always keeps cartons of it in his hoodie pockets. Alex loves to cuddle friends if they are up for it, sometimes even begging them to do it by making "puppy eyes." He is nearsighted, as evidenced by his glasses.

Aside from drawing and painting, Alex loves to play video games, and watch Youtube videos. If he's not frolicking with friends or drawing, he's almost always found watching videos on a computer, or playing video games, either online or with other friends.

Alex is best friends with Flippy, and cares for him very much, even going so far as to offer therapy to help for his PTSD. One of these therapy sessions almost resulted in death for him, since he came unprepared for when Flippy "flipped out". Miraculously, he survived, but he lost some big chunks in his ears from the ordeal.

While Alex is usually artistic, relaxed, and cuddly, he is not immune to a few anger releases. He usually gets angry when he sees bad activities happening, like any crimes from Lifty and/or Shifty, or when a character's actions could lead to death, usually seen from Lumpy. When he gets angry, he usually winds up shouting, scolding, and sometimes even fighting the one he's mad with.

Alex has been known to be scared sometimes, usually when he's realizing he will suffer a very bad injury or he and/or his friends are in danger of death. When he's really scared, he sometimes cries.

Alex also lives a double life as a secret agent of "Happy Tree Spy Corps", or HTSC for short, under the codename of "Agent A". As Agent A, Alex now dons a brown fedora with black trim, grey circular-frame shades, and a done-up mine shaft colored hoodie.

Agent A is the top agent of HTSC, having bested numerous villains and saved many lives, as well as cracking criminal cases that seemed impossible at first glance. Like most spies, Agent A has gadgets hidden everywhere on him, the most prominent being a high-powered laser hidden in his shades, and retractable spikes in his fedora.

Despite solving pretty much every case he's been on, Agent A is no stranger to tight fixes. Agent A has been captured several times, usually either with the intention of being interrogated or executed. None of these situations have held him for long though, due to the extremely high number of gadgets and fighting expertise that he possesses.

Agent A also works alongside other Happy Tree Friends in HTSC, including Flippy, the commander, and Sniffles, the scientist. Most of the time, he goes alone, only contacting others via a wristwatch.

Agent A is an undercover spy. As a result, he cannot reveal his identity as Alex the Fox to anyone, except for close friends and family (kids cannot know regardless of familial status), due to the high risk of sudden attacks while he's unprepared.

Agent A has gadgets designed for any situation at any time. Here are the known ones.

Alex sitting on a bench, before he asked out Mimi. Poor fox... 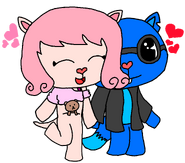 Alex and his fiancee, Mimi. (drawn by TheGreatJustinian)

Alex and Mimi getting ready for a picnic.

An example of Alex's "puppy eyes". He just wants a hug!

A mock-up of how Alex would look like if he had a character pop-up.

Alex striking a cool pose. (drawn by Chloe the Beaver)

Alex and Mimi sleeping together, made by TheGreatJustinian.

Alex, Mimi and their daughter, Molly, at the park. Seems someone's sleepy~

Mimi cuddling and petting a sad Alex.
Add a photo to this gallery

A mock-up of what Agent A's Ka-Pow! Series would look like.

Agent A swings into action.

Breaking his fiancee, Mimi out of a cage, like a good spy.

Oh no! Agent A has been captured!

Good thing he always has gadgets on him.

Can he make it?

Yes! Agent A is free!

Agent A in a classic spy peril, courtesy of Lifty and Shifty.

Lifty and Shifty having tied up and gagged Agent A for ransom from HTSC.

Agent A swinging with Mimi. Hold on tight!

Agent A and Mimi in danger!
Add a photo to this gallery
Retrieved from "https://happytreefanon.fandom.com/wiki/Alex_(Fox)?oldid=385684"
Community content is available under CC-BY-SA unless otherwise noted.