Howdy and Cole (Nothing to Sphere)

Angie is a character of HTFF.

Angie is a light gold English lop rabbit who is very shy towards others and feels slightly miserable. She has orange hair and ears and wears a flower. She is often seen bringing her favorite item everywhere, which is called the Golden Sphere.

Angie is actually a slightly friendly and nice person whom anyone can befriend with. The problem is mostly related to her personality - shy, miserable and very quiet. Angie is also often quite curious and always worries about something. Angie also seems pretty sensitive and easily cries over something, mostly because of her curse as she actually don't want to hurt anyone. She sometime forgot about her main problem.

Angie is always seen with her main item, the Golden Sphere, almost everywhere. She might use it for her own safety and also tries to protect it from others. The Golden Sphere is basically a cursed object. It's similar to The Cursed Idol but with a different mechanic. Every time Angie or the golden sphere gets in contact physically with other characters or objects, a calamity will happen upon it. The sphere itself will not harm Angie and can give someone luck(mostly healing), but it's pretty rare. Someone who succeed harms or kills Angie or her sphere directly will get instant effect.

Angie actually wants to befriend others but she can't leave her sphere behind. She also likes and wants to help people but it's all gone wrong because of her nature with her sphere.The Golden Sphere will always cause huge problems every time Angie appears with it due to how it works. 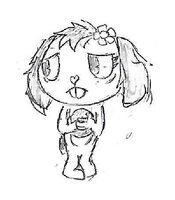 Retrieved from "https://happytreefanon.fandom.com/wiki/Angie?oldid=391644"
Community content is available under CC-BY-SA unless otherwise noted.