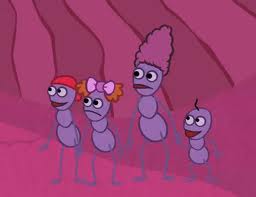 The Ant Family is a family of ants who are often targeted by Sniffles, who plans to eat them. But they usually get revenge by torturing him sadistically, and have caused him some of the most gruesome deaths in the series.

A typical result of Ant-Sniffles conflict

The death match we all want to see.

Daddy ant returns.
Add a photo to this gallery
Retrieved from "https://happytreefanon.fandom.com/wiki/Ant_Family?oldid=377843"
Community content is available under CC-BY-SA unless otherwise noted.