Arlo is a HTFF character.

True to his species, Arlo enjoys eating termites; his prime targets being Woody, Kween and their colony. Though his appetite isn't limited to other insect characters such as the Ants.

He seldom interacts with other characters, usually hiding away from them. He is rather sneaky and clever, able to outsmart the insects who try to escape his clutches. Due to this, he rarely dies, and his few deaths almost never involve insects.

Arlo takes a bite out of Sunset 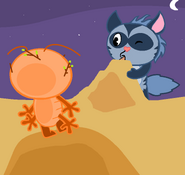 Add a photo to this gallery
Retrieved from "https://happytreefanon.fandom.com/wiki/Arlo?oldid=385019"
Community content is available under CC-BY-SA unless otherwise noted.