Bloody Lemonade is a HTF Fanon game. This game is crossover with original game that made by Mondo.

The player, had to play as Swëder . The objects of the game is simple, slice as many body parts (and lemonades). The player live is five knife, if one of the part fall below the game screen, it lose one live. If the player lose all the live, it game over which seeing Cutely and Giggles dead body and Swëder drinking bloody lemonade. If you slice the body part, it will half but you can do it until it became tiny part which cause you get 800 point bonus. The control is you had to use the mouse and "slice" the falling body part.  The game have three difficulty (Easy, Medium, Hard). The Easy is much slower and The Hard is much faster.

Cutely and Giggles prepared some lemonade on a beautiful and hot summerday. Swëder, who already caught a minor sunstroke, discovers handgranades among some scatterd lemons and instantly finds himself relegated at war. What might happen next? 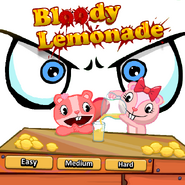 Intro of the game. 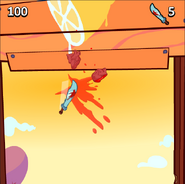 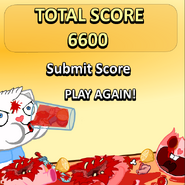 Game Over.
Add a photo to this gallery
Retrieved from "https://happytreefanon.fandom.com/wiki/Bloody_Lemonade?oldid=202725"
Community content is available under CC-BY-SA unless otherwise noted.