Bumpsy is a blue raccoon with a hat made of his skin and tail (actually made by his mother), a small tuft of hair, an eyepatch and a bandage on his left cheek. He also has bandages on his hand and lowerhalf.

He is quite nice but also cautious and nervous all the time.

He is an accident-prone guy who gets hit with bad luck on a regular basis, sometimes coming out of nowhere. While he is often injured from these, he almost never dies. So far, the only episodes he dies are All for One, One for All, Itsy Bitsy Turtles, and Happy Anniversary Friends.

Bumpsy, Castles and the wasps' nest.

Don't touch that sphere or else.... 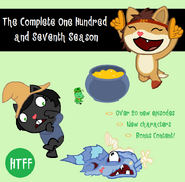 Add a photo to this gallery
Retrieved from "https://happytreefanon.fandom.com/wiki/Bumpsy?oldid=373776"
Community content is available under CC-BY-SA unless otherwise noted.