Let see how cowardly ironic this 'tree friend' can be.

Buzz is a character of HTFF.

Buzz is a tan-coloured panda with dark markings who is actually a psycopath and has a hylophobia, which is a fear of woods, forest and trees. He wears a hard hat properly and has bandages on his torso and one of his legs. He always brings something dangerous to defend himself, most often a chainsaw or an axe.

Buzz is a very nervous and paranoid character that is afraid of almost everything, especially trees. He can't calm down for a second if he sees trees around him. Unlike Flaky, he ultimately fears only one thing, trees. His fear of trees also leads him to fear other things. He never sleeps well as well as doing other things since his house in the middle of the forest.

Buzz can become crazy if he can't hold his fear of trees enough. He'll begin screaming and crying while swinging a chainsaw or an axe when this happens, bringing danger to some characters. His vehicle is actually a bulldozer so he can "safely" go outside of the area of his house. He can also use his bulldozer as a "defending" weapon.

No one can ever calm Buzz down since almost everyone is actually afraid to get near him. Buzz can't trust anyone else and almost chops everything when he is in crazy mode. People can also be annoyed by Buzz's action. Buzz can be normal if he's not seeing trees around him but he is still nervous on the inside. Whenever he finds a tree, he'll instantly run away, feeling under pressure and traumatized, but if his fear goes over the limit, he'll go wild and crazy.

The only thing that can calm Buzz down is bamboos. Bamboos are his favorite food and most of his things are made out of bamboo. Although he's mostly scared of trees, he's never scared of bamboos. Since bamboos are very rare to find in the town, Buzz might have difficulties in his daily life. He also sometimes uses bamboo as a defensive tool.

Buzz actually had a history about why he is afraid of trees, which explains his injuries on his body and his leg. Buzz can often be seen as if he's a traumatized character. His craziness to chop down trees will come if his fear is over the limit. His deaths are mostly because of trees and his own defensive tools. 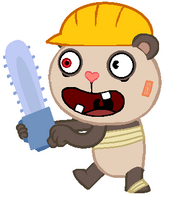 Retrieved from "https://happytreefanon.fandom.com/wiki/Buzz?oldid=363513"
Community content is available under CC-BY-SA unless otherwise noted.