Buzzles is a fanon character of HTF.

Buzzles is a yellow hornet with purple stripes and crooked antennae. Most of the time he is a calm character who likes honey and picnics, though he is short-tempered and can flip-out from certain situations (being swatted, having his hive destroyed, etc.)

His eyes turn red whenever he gets angry and will use his stinger as a weapon. Small animals and insects would get stabbed by his stinger, while the majority of larger characters would simply feel pain. Unlike most Flippy-sues, he has difficulty killing characters due to his tiny size. He would either sting multiple times or target vulnerable areas.

Most of his deaths would involve being stomped on or crushed (especially by bigger characters). 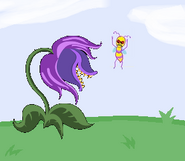 Buzzles vs. Creepy and Crawly

I think you are angry with the wrong guy, Buzzles.
Add a photo to this gallery
Retrieved from "https://happytreefanon.fandom.com/wiki/Buzzles?oldid=344743"
Community content is available under CC-BY-SA unless otherwise noted.