Start a Wiki
Caffeine is a fanon character who lost Vote or Die to Bro & Tyke. He is was later made a regular character as of Season 46.

Caffeine is a grey civet who is addicted to coffee and caffeine. Because of this addiction, he is shown to be drowsy most of the time and coffee is the only thing that can keep him awake. After consuming caffeine, he will temporarily leave from his drowsy state into becoming twitchy and hyperactive.

His kills and deaths may often be caused by his drowsiness or coffee. 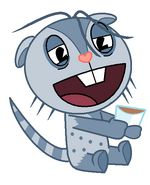 Caffeine with Jazz
Add a photo to this gallery
Retrieved from "https://happytreefanon.fandom.com/wiki/Caffeine?oldid=380776"
Community content is available under CC-BY-SA unless otherwise noted.