Cap is a HTFF Character.

Cap is a brown capybara with a rectangular head. Cap is constantly trying to fit in with the rest of the town, the main reason being his odd-looking head. He has trouble wearing most hats (even his signature cap is known to slide off his head) and can become a target of ridicule.

Another reason is that he has a bland personality. He usually looks for jobs to set an identity for himself. Unfortunately, he tends to screw up due to his slight incompetence and low self-esteem. Since his eyes are at opposite sides of his head, he may not see when something is in front of his face. 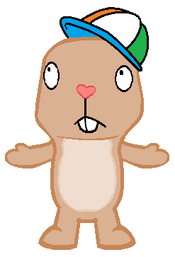 Retrieved from "https://happytreefanon.fandom.com/wiki/Cap?oldid=382845"
Community content is available under CC-BY-SA unless otherwise noted.