Cheerup is a giant purple tarantula with four orange eyes. Hence his name, Cheerup enjoys doing good deeds for people wherever he goes, which is why he is always dressed as a clown. Unfortunately, almost everyone he encounters  runs away in fear.

Despite the backlash he may recieve, Cheerup expects no reward other than the satisfaction of helping someone. He would even go as far as sacrificing one of his body parts or even his life to achieve this goal. Typically a character would respond in fear by running away or attacking him, worsening their situation. On rare occasions, he does recieve gratitude, but even then he may botch it up in another way (such as accidentally injecting venom through his fangs).

Keeping with his clowning business, he uses entertainment as one way to make people happy, but isn't very good at it and unwittingly causes much more harm (phsyical and/or psychological). 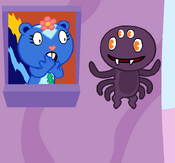 Retrieved from "https://happytreefanon.fandom.com/wiki/Cheerup?oldid=382493"
Community content is available under CC-BY-SA unless otherwise noted.