Not to be confused with Cheese

Small, but taller than Cub

Anyone who takes cheese from him

Cheesy is a fan-made character of Happy Tree Friends.

Cheesy is a yellow mouse with several unexplained holes in his ears, making them resemble swiss cheese wheels.

As his name and appearance suggest, he is addicted to cheese. His menu varies to all cheese types including cheddar, mozzarella, swiss, and all the way to port salut. But if there is any kind of cheese that Cheesy enjoys more, it would be Nacho Cheese. He will stop at nothing to get at that melt-in-your-mouth dairy food.

Cheesy's eccentric personality causes socialization with him to be very rare. He can maintain a normal attitude unless he is trying to get cheese. His obsession with cheese usually leads to his death and/or the deaths of others. The majority of his deaths are unsurprisingly cheese-related, involve being melted or burnt, and tend to be slow and brutal. 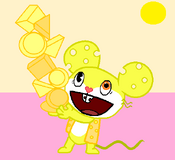 Retrieved from "https://happytreefanon.fandom.com/wiki/Cheesy?oldid=385281"
Community content is available under CC-BY-SA unless otherwise noted.