Choppy is a HTFF character.

Fight at the Museum or The Best Party

Choppy is a purple red panda who is a red belt in karate, wearing the belt around his waist. He uses his skills for honorable deeds like defending others, standing up to foes or simply getting things done.

Unbeknownst to him, he has the spirit of a dragon living inside him, trapped as a result of an ancient curse. Every now and then, Choppy tends to burp out fire, which he and everyone around him assumes is just really bad gas; it is actually the limited activity of the dragon attempting to escape. There are times, however, when the dragon is able to seize more control over Choppy's body, like when something gets him mad. When under the dragon's control, Choppy's eyes will glow yellow, his fire breath is maximized and he is even able to fly or hover. Once his rage dies down, he will return to his normal phase, shocked over what occurred.

Although he is unable to see the dragon most of the time, one exception is when he is asleep, having glimpses of the dragon in his mind. The dragon can also "speak" to Choppy, subconsciously tempting him to unleash his inner rage so as to take over his body. 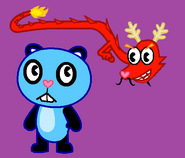 Add a photo to this gallery
Retrieved from "https://happytreefanon.fandom.com/wiki/Choppy?oldid=386772"
Community content is available under CC-BY-SA unless otherwise noted.