Clammy and Jammie are two characters. Despite being a duo, they hate each other.

Clammy is a gray clam who, despite being anthropomorphic, has no eyes or buckteeth. He likes eating and is often seen doing that on his spare time. He speaks in bubbles and is hard to understand because of this. Jammie often tries eating him, but her plans are usually foiled by him and he kills her in a torturous manner. He is friends with Mussel, as both are bivalves. When he carries things, they just float next to him.

Jammie is a brown otter who wears a pink flower on her head, though it often switches places on her head as an error. Jammie likes diving for pearls and other underwater treasures. Jammie likes eating bivalves such as mussels and oysters, though clams are her favorite. As a result, Jammie often tries eating Clammy. However, her plans are usually foiled by him and she is killed in a torturous manner by him. She usually does backstrokes when swimming. 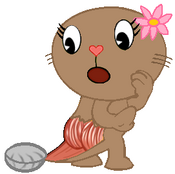 Retrieved from "https://happytreefanon.fandom.com/wiki/Clammy_and_Jammie?oldid=331826"
Community content is available under CC-BY-SA unless otherwise noted.