Cole is a fan character.

Cole is a black rabbit who wears a tool belt and a miner's helmet. His name derives from the word 'coal'. Cole is also black, like coal. He obviously works as a miner.

Cole's personality sees him as curious, accident-prone and slightly pompous. Cole believes that he is better and more productive than any other worker in the Town, which shows his overbearing attitude. Sometimes, Cole's accidents and vain attitude would cause death for him and others.

Cole has only one enemy, which is Commy the bossy wolf and formed many friendships with Josh, Shooter, Handy, Tycoon and even Smooth. Aside from his occupation as a miner, Cole also likes to live in luxury. He also has a speech disorder which causes him to stutter.

So far, the only episodes he survived are Rotten to the Inner Core, Stutters and Shudders and No Anthro-duction. 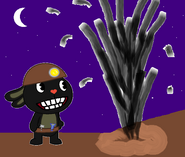 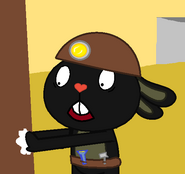 Add a photo to this gallery
Retrieved from "https://happytreefanon.fandom.com/wiki/Cole?oldid=333956"
Community content is available under CC-BY-SA unless otherwise noted.