Want to find a mysterious creature?
You're looking at one.

The Ghost
Any paranormal creature
Floppy

Cryptie is a fanon character of Happy Tree Friends.

Cryptie is a dark blue star-nosed mole who wears a helmet, thick goggles, and metallic claws and boots.

His name derives from the word "cryptid". As this suggests, he investigates cryptozoology and other things focused around the paranormal. He often carries equipment to find supernatural creatures. His goggles in particular are highly advanced equipment with many functions. With this advantage, however, there is also a disadvantage: he could not see clearly through the goggles. This usually leads him to ruin his plans and/or kill others, but most likely he misses monsters at the right moment. The question mark on his helmet represents both mystery and Cryptie's cluelessness.

He wants to find supernatural creatures mostly because he thinks they are cool and he wants to be rich, though reasons may vary depending on what he is after. Most other characters believe he is insane, though occasionally some may tag along with him to expect the unexpected.

In some episodes, he stars with The Ghost, and such episodes usually revolve around Cryptie trying to catch him. Most of his deaths may involve getting attacked or eaten by the creatures he tries to catch. A lot of his deaths also involve being crushed. 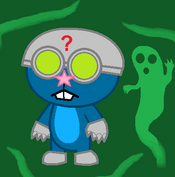 Retrieved from "https://happytreefanon.fandom.com/wiki/Cryptie?oldid=390138"
Community content is available under CC-BY-SA unless otherwise noted.