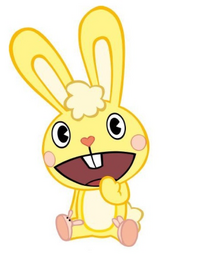 Cuddles is a yellow rabbit who is dangerously mischievous and self centered, which often leads to both his death and other characters' deaths. On the other hand, he is mostly friendly and caring, making his personality more complex than the others. Sometimes he can be mischievous, like in A to Zoo. He is often depicted as being best friends with Toothy and is usually seen in a romantic relationship with Giggles. Cuddles works for NAZUH. He is set to appear as the a supporting protagonist in The HTF Movie.

Retrieved from "https://happytreefanon.fandom.com/wiki/Cuddles?oldid=391685"
Community content is available under CC-BY-SA unless otherwise noted.