Emmy ("Fetch a Quail of Water")

Daphne is a mouse-deer who worked as both model actress and toy-maker at day. She is Mix's girlfriend, Salvia's eldest sister, and Campbell and Decha's daughter.

Daphne is shown to be "both delightful and sour, as she has a bad temper for moments before changed back to her normally kind-hearted persona". Most of her friends know about this and have to wait until she is cooling down, otherwise, they will get yelled by her. Not only that, but Daphne also calls her friends by crude nicknames, especially for Mix, though she never wants to kick or hit him. Even then, she is a caring and understanding friend to them. She still loves Mix very deeply but won't admit it to either him or his friends.

While looking very feminine, she doesn't let her martial art lessons away from her and will strike anyone who did something bad to her and her family and friends. Daphne is brutally tough and strong enough to throw large people to the ground, however, she comes with acting first before thinking, a contrast to the Prank Duo. Even though of that, she can't defeat a large group of people by herself. Besides the strength, Daphne has weaknesses; spiders, feathers and pollen. As the former was due to her phobia, the latter two are her main allergies and will sneeze uncontrollably.

Their friendship was started during their junior high school year, at first, Daphne was annoyed by their practical jokes but slowly got used to it, even on rare occasions, chuckled on it.

As being friends of The Prank Duo, they both are in neutral yet good terms. Daphne comes to her house for tea and has a conversation together with her.

She has once impressed by Irin's ability to understand and communicate with animals, even the wildest ones. She is even shocked by how she manages to survive from the beasts.

Percentage of the deaths occurring: 48.08%

Percentage of the elimination: 02.00% 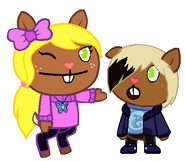 "Where is that moron go?"

Daphne tries to prevent her brother from hearing swear words.

Daphne is shocked by what has happened to Salvia. 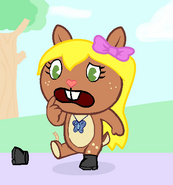 Daphne with normal legs and a chipped toenail.

Why Daphne shouldn't have normal legs.

Daphne with her mother

That was so close!

Daphne gets the Rapunzel from Tangled treatment.

This can't be real.

Daphne brings her cat near to an insane dog.

Daphne is talking with Kitty Kat. 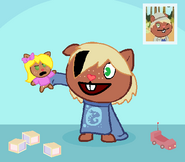 Daphne as a doll.

Her usual reaction meeting the duo.

Daphne runs into an old flame, this time not to burn him.
Add a photo to this gallery 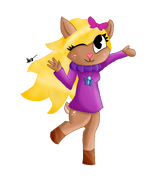 Created by BlueTide.
Add a photo to this gallery 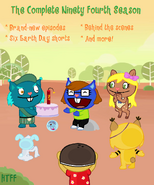 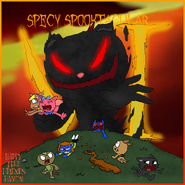 I don't know what happened here.

She is not in favor of the couple.

Daphne and her family photo.
Add a photo to this gallery
Retrieved from "https://happytreefanon.fandom.com/wiki/Daphne?oldid=383099"
Community content is available under CC-BY-SA unless otherwise noted.