Here come the children of the night.

Twins (all of them)

Mac, Mile and Mica or mostly known as Dark Kittens are characters of HTFF.

Mac, Mile and Mica are dark grey kittens who enjoy causing some problems in the night. They are twins but easily recognize them by their eye colors. Mac with red eyes, Mile with green eyes and Mica with blue eyes. Just like most females, Mica appears to has eyelashes.

Unlike other kids, these triplets are actually smart and enjoy causing troubles on purpose. They like stealing various stuff in nighttime, as no one can't really sees them properly in the dark. Surprisingly, they're not interested into valuable stuff, as nothing fun from it. They seem always steal foods.

Whenever they wanted to causing troubles, they always do it by team working. Mac into strength, Mile into speed and Mica as brain of the twins. They don't care about other peoples suffering from their troubles, as they thought it's fun. They only do this in nighttime and in the dark place, which is hard to detects them. They will hide before causing troubles to others.

Even though they are actually care about each other, they will start to blame each other and fight if something went wrong. They will attack if someone sees and approaching them. These triplets live under the bridge and doing their own activity if they have nothing to do. They will always went out of their place when there's people around, mostly in nighttime, when they decided to causing troubles in the town. They never regret what they did to others. 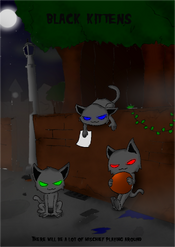 Retrieved from "https://happytreefanon.fandom.com/wiki/Dark_Kittens?oldid=387991"
Community content is available under CC-BY-SA unless otherwise noted.