A support guy who always get SEALed.

Dexter is a character of HTFF.

Dexter is a light brown seal who teams up with The Journalist and is the main support of his team. He always helps his friends complete their job by carrying items for them. He also gives some warning when he senses danger around. He is very loyal to his teammates Irin and Amp, but not Zee (because of his grumpy and bossy personality).

Dexter also known as "The Calamity Guy" because he's always exposed to danger. By gives his teammates a warning about the danger, it results in him being the one who gets into the danger. This make him have the lowest survival rate in the team.

Dexter actually is a very careful person since he always get into the dangers. After looking some safe places, he can do his job carefully. His items also lead him into the calamity, with the resulting injuries or death. If he made little mistakes during his activities, it ultimately seals his fate.

His worst enemies are The Clams. Dexter is The Clams' main victims; they commonly eat him if he is alone with them. This is unlike when they are with Zee and Amp. The reason why he's The Clams' main target is unknown, other than his "curse" of encountering misfortune; if anything, his blood make them very interested in inflicting injury or death Dexter. He say anything about it to Irin (their owner) of him being so afraid of them that it makes him scared silent.

Irin and Amp both care about Dexter and his accidents. Irin also sees when The Clams bully him and tries to help him to get away from her clams. Irin will not leave her clams alone with Dexter, but The Clams always get out of the tank and chase Dexter when Irin is not around. 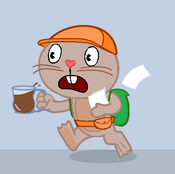 Retrieved from "https://happytreefanon.fandom.com/wiki/Dexter?oldid=375837"
Community content is available under CC-BY-SA unless otherwise noted.