Diamond is a fanon character.

Diamond is a white caracal in a blue princess dress and is the older (biological) sister of Paws. She moved to after her house brunt down along with her other family members. Although she may not be royalty, she is extremely fancy and well class, despite this, she does have the tendency to mess with Paws a lot. Besides she, she is actually highly trained with knives (specifically bow knives) and can be an extremely tough fighter.

While she may mess with her, She does still have a special bond with Paws. Mostly cause, she herself lost her right leg in said fire, and as a result has to have a prosthetic one.

Were she came from. 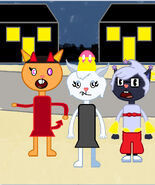 Add a photo to this gallery
Retrieved from "https://happytreefanon.fandom.com/wiki/Diamond?oldid=380255"
Community content is available under CC-BY-SA unless otherwise noted.