Dino Digs is a character of HTFF.

Dino Digs is an indeterminate species, as he is always in a purple dinosaur suit. He constantly tries to get out but the zipper is stuck. Whenever he finds someone, they would either run away from him or misinterpret his words. This is because the face of his suit always keeps the same expression no matter his mood.

Since he is unable to see through the suit, he often obliviously lands in various situations. In fact, he unknowingly has a job as a child entertainer. Unfortunately, the children he encounters usually get frightened of his appearance, and end up being killed by him (especially since he cannot see them).

His deaths usually occur in a way to hide his true identity. At most, only his organs and blood would be shown and not his skin or bones. When he talks, it sounds as if he's chuckling. Despite this, he isn't usually happy, but in fact he's gone crazy from being stuck inside that suit for so long.

See how happy the childrenwhen see his fate 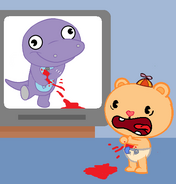 No one realizes he is already dead.

Add a photo to this gallery
Retrieved from "https://happytreefanon.fandom.com/wiki/Dino_Digs?oldid=380826"
Community content is available under CC-BY-SA unless otherwise noted.