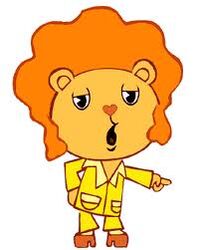 Disco Bear is a golden bear with 1970s style clothes and an afro. He likes disco dancing and girls. When someone gets hurt, he mistakes their movements of pain for dance moves. His catchphrase is "Oh Yeeeeeaaaaaah!" in a deep voice.