Act cool while you can. B-)

On My Way Up

Eddy is a character of HTFF.

Eddy is a sea green pelican who appears trying to be cool around others. Just like some bird characters, Eddy has a pair of wings instead of hands and wears a pair of shades. He mostly seen at the beach.

Eddy is well known as a pelican who is trying to act cool but actually annoys others. Eddy always seen relaxed at the shore but he can be an egomaniac if he got some attention. He also always flirts with some girls who appear at the beach and even at the town.

Since he appears relaxed most of the times, he doesn't care about other's fate in front of him until he forced to help. If he does, he begin to show off. He always carries something with his huge beak and seems never uses his wings other than flying.

If he do other stuff besides relax at the beach, he will do something to impress others, mostly towards the girls by shows off his stuff or his huge and "strong" beak. Eddy also has strong danger awareness but instead of running away, he is overconfident and trying to overcome the danger by himself (in the same time trying to show off). 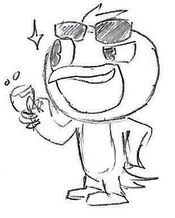 Retrieved from "https://happytreefanon.fandom.com/wiki/Eddy?oldid=389707"
Community content is available under CC-BY-SA unless otherwise noted.