Just protect your body from get possessed.

Eerie Ather or mostly known as Eerie is a character of HTFF.

Eerie is a blue axolotl and also appears to be a ghost. She wears 2 skull shaped hairclips at the each side of her head. She can only be seen with her full body when she is near in someone's sight. Her gills also appear to be her hair.

Eerie is an enthusiastic and yet a bit sinister ghost who likes possessing tree friends, include other living objects. Someone who not really careful in nighttime might get possessed by Eerie. Someone might recognize Eerie possessing a living objects or tree friends is by whole eyes turning green or cyan color.

As a ghost, Eerie can passes through objects and into the ground. Eerie can only seen in nighttime in her ghost form, unless she possessing someone. She can befriends with others while in ghost form, just don't let her takes over other's body so easily. Others might just let her possessing their body just to let her eat(even though she actually have no reason to eat as a ghost). Eerie mostly uses someone's body just for fun and to tricks others. She also enjoys scaring others.

Eerie does has weaknesses as she can be killed for the second time if she inside someone's body, by killing the body. This might be resulting killing both Eerie and the people she possessed. Someone might can be avoid from get possessed and Eerie also can be trapped inside the mirror. She can breaks out the mirror if the mirror breaks. Some spells might can against her. 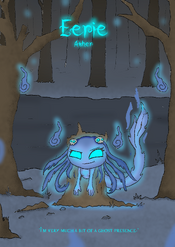 Retrieved from "https://happytreefanon.fandom.com/wiki/Eerie?oldid=375289"
Community content is available under CC-BY-SA unless otherwise noted.