Rollerblading antelope would be safe.

Ellie is a character of HTFF.

Ellie is a pink Antelope who really loves indoor games or sports. She wears a googles, wrist protector, elbow pad and rollerblades due her interest to sports.

She is very active character and rarely get tired. She mostly seen rollerblading around the town. Enjoys all kind of sports, mostly the outdoors. She very talented at parkour activities, skating and rollerblading. Her home near to the stadium so she can do her main job easily. She's gonna accepts any kind of outdoor sport challenge as she loves challenges.

Also befriends with Nimbus, who enjoys sky-themed sports. She always help him due his blindness. Unfortunately, her activities can lead her to her injuries and death. If a little mistake happen, the huge accident will happens after that.

Her accident also can harms anyone near her, includes the best one. Interestingly, most of her accident do not lead to her death instantly, but very bad injuries.

It's very rare to see Ellie is inside(not related to sports). She always go outside and place to places by rollerblading if she don't have something to do. It's also a warning not to get close with her sometimes due her accident. 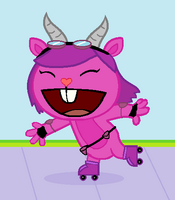 Retrieved from "https://happytreefanon.fandom.com/wiki/Ellie?oldid=357112"
Community content is available under CC-BY-SA unless otherwise noted.