Elliott is a fan character.

Elliott is a gray sloth with permanent bags under his eyes due to his severe case of fatigue and drowsiness. He is constantly tired and may fall asleep at any time. He usually falls asleep while doing a task (i.e., driving), which often results in him accidentally killing other characters, and occasionally himself.

Elliot tries to do many things to keep himself awake, such as drinking coffee or poking himself with his sharp claws (a less frequent way he kills other characters). This may work for a certain amount of time until he falls asleep again.

Elliot is known for always wearing striped pyjamas and moving very slowly. He also mostly groans and is frequently seen with a grumpy look on his face, seldom seen with a smile. He rarely dies, and when he does die he often doesn't notice it since he is asleep.

Elliott can sleep through any situation

Snoring can be a problem 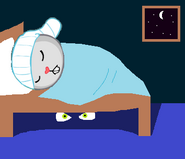 Add a photo to this gallery
Retrieved from "https://happytreefanon.fandom.com/wiki/Elliott?oldid=322547"
Community content is available under CC-BY-SA unless otherwise noted.