Start a Wiki
Some fans have created evil sides for other canon characters other than Flippy. Fans pretend that they were also in the war, or they could possibly have a different reason for Flipping out. This list shows the most known ones.

NOTE: This does NOT allow the following characters to be used in place of Flippy. Only use Flippy or related characters for episodes.

Evil Flaky is often seen around the Flippy x Flaky pairing. Sometimes fanart shows Flaky in army uniform and flipping out. Her evil name is simply Evil Flaky or sometimes spelled with a capital K, FlaKy. Her pupils are usually red or yellow.

Also called Ainutep (Petunia backwards) evil Petunia could have been inspired by the end of the episode "Wishy Washy". Her eyes are often shown as blue or red, and she flips out in fan episodes from dirt or uncleanness.

Evil Giggles is sometimes shown with the Flippy x Giggles pairing. Fanart of Giggles in army uniform has been seen. Evil Giggles eyes are shown to be the same color as Evil Flippys.

Evil Cuddles has been seen in only a few pictures. He has the same eye color as evil Flippy and and is simply called Evil Cuddles.

Evil Mime is often seen with blue pupils and sharp jagged teeth. Some fans say he was in the war or that he has a past trauma.

Evil Russell is the evil side of Russell. He has grey or blue pupils and first appeared Debatablely in Get Whale Soon.

Evil Lifty is an upcoming evil side of Lifty that will also be HTForever333's fan episodes. 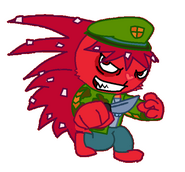 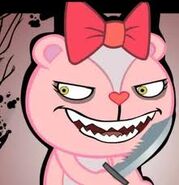 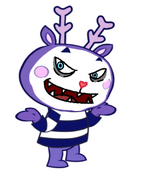 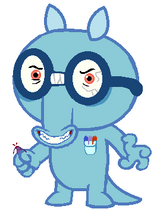 Evil Russell
Add a photo to this gallery
Retrieved from "https://happytreefanon.fandom.com/wiki/Evil_Sides_of_Canon_Characters?oldid=291772"
Community content is available under CC-BY-SA unless otherwise noted.