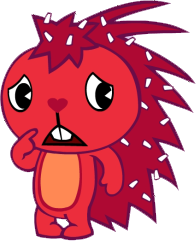 Flaky is a shy, red porcupine with white flaky dandruff on her quills (hence her name). She is known for being a coward and scared of many things, resulting in her often laughing nervously. However, on occasion, she has had moments of bravery and faced her fears. It has also been shown that she is a close friend to Flippy knowing personal information and about his condition. However, she is known to fear his other state, Fliqpy.

She has multiple fears and is very cautious of the state around him. As a result, she knows what it's like to die and knows what happens when death arrives.

Retrieved from "https://happytreefanon.fandom.com/wiki/Flaky?oldid=321605"
Community content is available under CC-BY-SA unless otherwise noted.