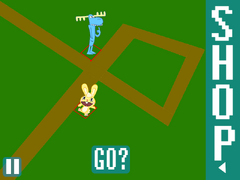 Flip Defense is a game that is a parody of the Tower Defense games.

A bunch of Flippy-sues are rampaging their way into Happy Tree Town and you must protect the citizens by placing characters in random places and they will attack the enemies in a certain way. Whenever a sue is killed, you get money which you spend on more characters. If a sue reaches the end of the path, some blood appears and the bar on the bottom of the screen goes down. If the bar goes down to 0, then it will show an image of Flippy killing Toothy, with Movy, Josh, and The Zebra dead in the background.

Each path gets longer as it goes.

Retrieved from "https://happytreefanon.fandom.com/wiki/Flip_Defense?oldid=109402"
Community content is available under CC-BY-SA unless otherwise noted.