Start a Wiki
Frostbite is a fanon character of Happy Tree Friends.

Frostbite is a polar bear with a purple scarf and two hairs on top of his head. He speaks with a slightly gruff voice (similar to Pop but lower-pitched).

He tends to enjoy the cold and likes frozen foods or drinks. He could not stand the heat and is seldom found in hot areas unless things like cold beverages or ice cream are available.

While typically a nice person, Frostbite can be driven insane by two things: getting brain freeze and being in the heat too long. When flipped out or developing brain freeze, a vein will become visible on the side of Frostbite's head and his hairs will stand up. He will also kill and sometimes even eat other characters (hence his name).

Frostbite has a short temper, which usually leads to bad situations. Frostbite usually eats food frozen. As a result of his stupidity, he usually never defrosts his food and can never penetrate his frozen food. 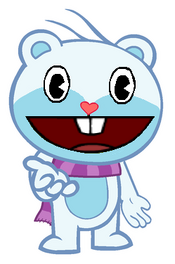 Retrieved from "https://happytreefanon.fandom.com/wiki/Frostbite?oldid=380800"
Community content is available under CC-BY-SA unless otherwise noted.