He is a brown-green skunk with messy fur. He is well known for his love of garbage - he sleeps in a trash can and eats thrown-away food, though his favorite food is day-old pizza.

He carries a bad smell which usually makes other characters sick and occasionally they vomit when he passes by. He is often seen with waving green stink lines above him, which disappear and reappear frequently. Fungus sometimes uses his odour as an advantage (as seen in Bank You Very Much, where he sprayed to clear space and avoid waiting in line). He never takes a bath due to his fear of water.

He doesn't seem to have many friends because of his smell, with the exceptions of Lumpy and Rotty (Lumpy is stupid and Rotty is dirty like him). Josh can be friends with him sometimes. He also has a crush on Petunia, though she hates him because of how unsanitary he is. But that doesn't stop him from making "efforts". The closest he came to winning Petunia's heart was in Cologne Again, where he gave up his filthy ways to impress her. Petunia gave him a kiss, causing him to spray his odor back and ruin everything. 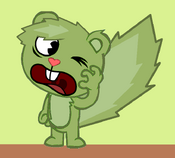