Gary is a yellow lion. He wears a red T-Shirt and blue shorts. He likes soda and lemonade. He idolizes Splendid and appreciates his heroics.

Larry is an optimistic orange tiger. He wears blue glasses, brown shoes, a green sweater, blue jeans and a red cap. Larry is known to be very happy most of the time and always looks on the bright side of life. His motto is "Turn that frown upside down!". He keeps a balloon dog, who he imagines is real, with him. He likes anything from cookies to television to even doorknobs, but mostly playing at any time. Like Gary, he idolizes Splendid.

Mary is a brown bear with rosy cheeks and long black hair. She wears a white shirt and a jean skirt. She hates anything dirty, and freaks out when in the dark. She tries to protect her cousin Cub, but fails miserably, mostly due to Pop's bumbling.

Jerry is a red elephant. He wears a purple T-Shirt and blue shorts. He's stupid and hasn't even gone to school. Unfortunately for the other four, he was assigned to be their caretaker. Due to their similarities, he and Lumpy are very good friends.

Clary (Clarice) is a yellow giraffe with brown spots, a head marking, rosy cheeks and brown hair on pigtails that tend to bounce around when she is in the middle of any activities. She wears a red dress and red bow on her hair. She loves playing with dolls. She's is generally a happy and upbeat girl. She is portrayed as being a nice, sensitive person, and she enjoys being with others; she has similar personality traits to Giggles, however, it is shown she can get childish very easily. She's also kind and gentle to everyone. 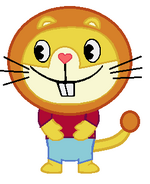 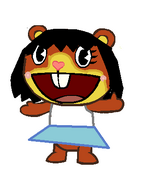 Clary
Add a photo to this gallery
Retrieved from "https://happytreefanon.fandom.com/wiki/Gary,_Larry,_Mary,_Jerry_and_Clary?oldid=390106"
Community content is available under CC-BY-SA unless otherwise noted.