Gator is a fan-made character of HTF.

Gator is a grey-green alligator who lives in the sewers. He is supposedly a sewer worker judging by his clothes. However, he is not very intelligent or competent, and in fact causes a lot of sewage-related problems.

Except for occasional sunbathing, Gator rarely comes above ground. One reason he does is to eat other characters, usually popping out of toilets or manholes to prey on them. It is quite possible he was sent into the sewers because he is a danger to civilization.

His lifestyle and occupation make him an enemy of Plunger. They would frequently cross paths if Plunger had to fix a mess that Gator caused. Gator also tries to eat Plunger, although his shell is a problem.

The usual outcome of a visit from Gator 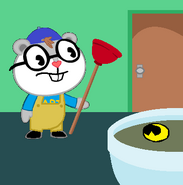 Gator awaiting his next victim

Add a photo to this gallery
Retrieved from "https://happytreefanon.fandom.com/wiki/Gator?oldid=380837"
Community content is available under CC-BY-SA unless otherwise noted.