Seafoam is a green Manx cat with red hair that extends into a long ponytail shaped like a tail fin or fluke. She also wears seashell earrings, a fish shirt and mermaid-themed pants. She has an interest in the ocean and fantasizes being a mermaid. The problem with this (other than her not being a mermaid) is that she has a fear of water; whenever she attempts to jump into a pool or even take a bath, she chickens out at the last minute. Even in the rare times she actually submerges, Seafoam cannot swim.

Gilly is Seafoam's beloved pet goldfish who has a similar yet alternate goal; while she dreams of being underwater, Gilly aims to explore on land. He is able to accomplish this to some extent by carrying what appears to be a hamster drink bottle on his back. He has little problem getting around unless he is somehow separated from his water pack, at which point he is in serious danger of asphyxiation.

As her trusted companion, Gilly often tries to help Seafoam conquer her fear of water. Gilly is quite practical and has been known to create brilliant ideas from the least likely of sources. Seafoam, on the other hand, is somewhat naive. There are times where she inadvertently disturbs Gilly by eating other fish or seafood in front of him, or loses him at the worst of times. She also tends to forget the names of certain sea creatures. Yet in spite of all this, the two have an almost inseparable relationship and are best friends to the end.

This is a dream, BTW 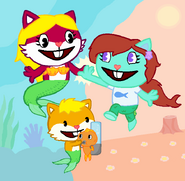 Add a photo to this gallery
Retrieved from "https://happytreefanon.fandom.com/wiki/Gilly_and_Seafoam?oldid=380256"
Community content is available under CC-BY-SA unless otherwise noted.