Sucks to be him.

Gloomy is a fanon character of HTF.

Gloomy is a grey vampire bat whose dark hair covers one of his eyes. He wears a black hoodie with bat wings under the sleeves.

Gloomy is a troubled character who feels as if the universe hates him. His depression borders on suicidal tendencies; but whenever he tries to kill himself, he ends up surviving the vast majority of times. His apathetic disposition means the concept of death does not faze him.

Mysterious, shy and usually keeping to himself, many grow inclined to make speculations about him. Particularly, people will assume he is a vampire. Things especially get dangerous when monster hunters or paranormal investigators come around. Gloomy generally tries to ignore these claims with a scowl, but if put in jeopardy he will simply take it.

Chances are slim that Gloomy is an actual vampire; more likely he is a regular vampire bat victimized by stereotypes. That said, he has two distinct bite marks on his neck (given by Solaris) and a severe allergy to garlic. He also despises sunlight, though being nocturnal it isn't as conspicuous. 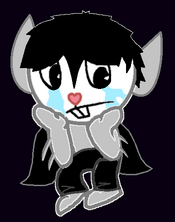 Retrieved from "https://happytreefanon.fandom.com/wiki/Gloomy?oldid=388154"
Community content is available under CC-BY-SA unless otherwise noted.