Goosta is a fanon character of HTF.

Goosta is a light green goose who usually has derp/googly-looking eyes.

He likes to annoy people in various ways, particularly honking, until they snap. Among his favorite victims are Jerky, Pierce, or other characters who can easily lose their temper.

But Goosta mostly enjoys internet videos and memes, shown by his Me Gusta shirt and Nyan Cat cap. Sometimes he tries to make his own meme. Many characters will assume he is crazy for his behavior.

To a lesser extent he may poop at people when flying, either to annoy them or if they irritate him. As a matter of fact, he is territorial like real-life geese and may occasionally become aggressive. He also dislikes ducks for an unknown reason, and due to this he is a rival of Drake. 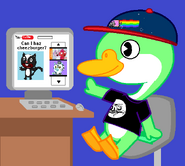 The typical daily routine of Goosta 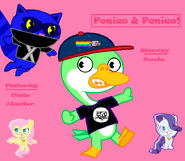 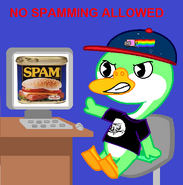 Goosta went insane! But Cappy.... not.

Had to be done.
Add a photo to this gallery
Retrieved from "https://happytreefanon.fandom.com/wiki/Goosta?oldid=373095"
Community content is available under CC-BY-SA unless otherwise noted.