Grunts the Gruesome (known simply as Grunts) is a fan-made character of Happy Tree Friends.

Grunts is a dark red boar with a bristly mane, three tusks, a beard with a bowtie, and norse clothing.

Grunts was originally a Norwegian viking from centuries old, who pillaged towns and fought his enemies (and the odd dragon). At some point, he was frozen in a block of ice. In his debut appearance I Thaw That Coming, he is thawed out of his ice block and allowed to roam again.

He has no idea that he is in a different time period. He commonly mistakes objects/characters around him for other vikings, ships, dragons, or other things from his time. Due to this, he flips out and winds up destroying everything/everyone in his path. He also has been known to steal money the way he stole treasure back in the day.

Grunts never socializes, and immediately flips out in almost any situation. Grunts kills anyone in his path when enraged, using mainly his sword.

Grunts thawing out of his ice

Viking vs Pirate...I know who would win! 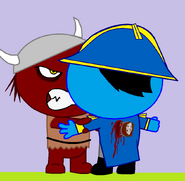