Gonna expect the huge absent-minded one fly over here.

A bit smaller than average.

Tweets (Back to Bag)

Take It or Leaf It

Hal is a character of HTFF.

Hal is mint sugar glider who's an absent-minded person and always trying to figure out what he's doing. Like other sugar gliders, Hal has dark markings on his body and his wings appear to be badly ripped. His size also a bit smaller than others.

Hal pretty much known as forgetful one and easily distracted by most stuff in his surroundings. On the bright side, Hal knows some people kinda well but the things that he always forgetting is what he's doing during that time. He always trying to remember but it took way longer than usual. This always lead what he's doing in that time worse.

Hal is pretty neutral one and trying to act cool, also would help any people but his short memory always ruining it. He can easily distracted by most stuff in his surroundings, which always leads to him didn't remember what he's doing. Hal often aware of he's forgetting something and trying to remember it. Despite being forgetful, he's not a stupid person.

It's unknown how Hal got his wings ripped, even himself don't remember about it. He's sure loves to fly but his ripped wings ruining his flight. Hal still can fly but it's gonna be unbalanced and high chance get himself into accidents. Since he's pretty forgetful, he didn't remember about his wings' condition sometimes. 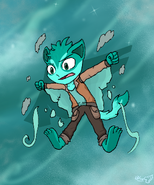 Welcome to the town, Hal, forget something? 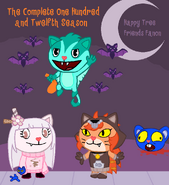 Add a photo to this gallery
Retrieved from "https://happytreefanon.fandom.com/wiki/Hal?oldid=342233"
Community content is available under CC-BY-SA unless otherwise noted.