Happy Tree Friends Fanon Wiki is a fanon wiki where users create characters, participate in roleplays, make episodes, and much MUCH more! We are a very open and caring wiki and look forward to your great creations! If you need help, be sure to post your question on the Questions and Answers board. And be sure to visit the rules page so you can get the idea of what goes around the wiki. So, what are you waiting for? Get out there, start creating, and have a great time on Happy Tree Friends Fanon Wiki. 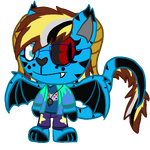 The Featured Character for February 2016 is... Jadeite! Jadeite is a fan character that is GamingDubstepGriffin101's self insert. She is a light blue and black calygreyhound/demon hybrid with various powers. Jadeite was born from a male demon named Jasper and a female calygreyhound named Amethyst. She was the youngest in a family of 2, and her only older brother is Nephrite. Read more about Jadeite...

The Featured User for February 2016 is... FlippyxFlakyalltheway! FlippyxFlakyalltheway (or simply FxF for short) joined the wiki less than 4 months ago and look at her now! She already has an edit count of over 1000, she's created a multitude of amazingly popular characters, and she became the first ever user to be a Featured User and not be an admin! Not only that, she became a Featured User in such a short period of time that she's broken 2 records on the wiki! Click here to see an Interview with Fxf...

ACTIVITY
Retrieved from "https://happytreefanon.fandom.com/wiki/Happy_Tree_Fanon_Wiki?oldid=235542"
Community content is available under CC-BY-SA unless otherwise noted.