Following the release of Still Alive, the Happy Tree Friends series was put on its longest hiatus ever. With their career indefinitely over, much of the cast went their separate ways to look for new jobs. Only Lumpy remained at Mondo studios to help gather funding to bring the show back.

After a decade of endless work, the studio had finally gained enough money for the show to begin production again. However, a lot changes in the span 10 years, and the characters we once knew are no exception. Follow the gang in their new endeavors and discover where they are now.

Unlike the previous show whose episodes spanned 2-7 minutes in length, the episodes of HTF: 10 Years Later run about 22 minutes on average. Dialogue also accompanies the characters' speech. The series overall is a reality show, which follows the characters living daily life. In addition to violence, it also contains other mature themes such as sex and drugs, as well as pop culture references. Humans also appear, mostly as celebrity cameos and occasionally minor antagonists.

Lumpy is the only member of the HTF crew to stay with Mondo following the hiatus, as the show was the only successful thing he had in life. Because of this, he tried relentlessly to raise funding for the studio in order for his career to return. He soon worked his way up to CEO of Mondo Headquarters, unwittingly bringing the company further into debt. Years of attempts had corrupted him and made him even greedier and power-hungry. By the time the show restarted production, he would discreetly find ways to torture or kill his former friends, using acts of stupidity as a ruse to cover his tracks.

Following the show's hiatus, Cuddles spiralled into boredom. Wanting to quench his thrill-seeking tendencies, he began watching Jackass and would start his own stunt series, garnering a large fanbase over the years. Toothy decided to tag along with him as his cameraman and loyal assistant. His left eye is now replaced with a glass eye which tends to fall out as a regular gag.

Giggles gained a career as a model, quickly becoming acquainted to all the attention and glory, becoming more and more absorbed with her beauty. This would soon take a heavy toll on her. As years passed, her popularity declined. She eventually signed up for Tinder and dated with anyone she could get her paws on, never quite being able to satisfy her lust. She and Cuddles have formed a bitter rivalry.

In Season Two, she becomes the mother of twins and changes her behavior to provide a good example for them. Although regaining most of her sweetness, she is still prone to vulgarity at times of anger or depression.

Handy and Petunia were married happily and went on a tropical vacation for their honeymoon. Unfortunately, Handy lost his legs in a shark attack. Since then, he has been restricted to a wheelchair, with Petunia becoming his caretaker. Petunia has become more protective of Handy, sometimes to an overbearing degree, especially in terms of his hygiene. Her OCD is also more severe.

Nutty worked his way up to be the proprietor of a massive candy chain, owning an entire factory that produces sweet and sugary confections. He savored his life of luxury by gorging on expensive sweets and swimming in his chocolate rivers, becoming physically chubbier. Unfortunately, he was later fired amidst allegations of sexual assault (mostly on the candy). He is now a depraved sugar addict who dwells in a cardboard box outside his factory, sometimes breaking in to satisfy his needs. He is noticeably much less energetic than he was ten years ago, but is still prone to giggling at times.

After leaving Mondo, Sniffles would gradually become one of the world's top leading scientists, inventing all sorts of revolutionary devices and cures for major diseases. His most famous goal in particular is a machine that brings the dead back to life. Sadly, it was stolen from his lab and he has since sent the government to locate it, as it is dangerous in the wrong hands. His friends rarely communicate with him unless for an invention, much to his annoyance.

Feeling liberated from all the chaos going on in Mondo studios, Flaky felt inner peace. She developed a zen garden in her backyard where she would meditate daily. As soon as she got word of the show's return, she attempted to board a flight to Argentina. At some point during the flight, however, she covered one of the bathrooms in puke and impaled several passengers with her quills, leading the plane to turn back and for her to be banned from the airport. She is now viewed as the therapist of the group and even specializes in acupuncture.

During the hiatus, Pop signed up as a fry cook at a local burger joint. He no longer smokes, but now drinks alcohol to quell his depression. During a business trip to New Orleans, he would meet a lovely bat woman and dark magician Luna, with whom he gained an intimate relationship. She ended up marrying him and following him home.

Disco Bear decided to just unwind. He earns his money by selling his stash of 70s memorabilia online. He currently lives alone and will occasionally try dating, sometimes dancing in his spare time, although he has lost most of his 'funk' over the years.

Russell started a boat business and earned the money for a new ship. He also lost his other hand in the same shark attack that claimed Handy's legs. He later sailed across the world on a five-year voyage. He currently spends his days at the docks or singing sea shanties at the Sailor's Pub.

A year after leaving the studio, Mime's vow of silence was lifted. He decided to move on from mimicry and become a full-on comedian. Unfortunately, his jokes turned out to be annoying and extremely unfunny, and after an offensive joke about JFK that brought about a slew of controversy, he was fired. Nowadays, he tries to look for new gigs, but his terrible jokes always seem to ruin things.

The Mole moved to Paris, France, where he would gain a career as a professional artist. He created many masterpieces which sold for thousands of dollars. One of his paintings was displayed at the Louvre, but was stolen a short while later.

While still a pair of thieving twins, their kleptomania has worsened. Instead of just robbing banks and stores, they are now wanted in over 40 countries as notorious drug dealers, traffickers and animal smugglers. They are most likely the suspects for the theft of Sniffles' life-revival machine and the Mole's Louvre painting.

Flippy went to counselling and finally put his Vietnam War flashbacks to an end. However, he soon found himself unsatisfied with his mundane life. Inspired by the medals he received in the war, he signed up for several years of military service in Afghanistan. After that, he returned home with a new case of PTSD that has caused him crippling depression.

Splendid attempted to be a superhero in real life but was detained by police because of the chaos he caused. He soon became a dark and brooding vigilante who prowls the night, his poor night vision making him twice as dangerous. By day, he is an average joe who is drowsy and cranky, only managing to keep himself awake with a mug of coffee and a bagel roasted with his laser eyes.

Proven clinically insane, Lammy was sent to an asylum but escaped with the help of a certain cucumber and has since been on the lamb, so to speak. The original Mr. Pickles has long decomposed and she constantly replaces him with other pickles that subsequently also go bad, occasionally taking bites out of them. Being on the show again meant she would have to disguise herself on screen so as to not draw attention from the law.

Truffles spent his days hiding in the shadows, working a secret photobombing career and stalking the other cast members. After being fired for posting a nude photo of Giggles online, he took part in gambling and other illegal activities, soon earning a mansion and a private island. He was eventually hired by Lumpy to help reunite the cast. This promotion earned Truffles a spot as one of the main characters, replacing Cro-Marmot, as well as being Lumpy's assistant.

Introduced in Season Two as the twin children of Giggles and Russell. Aqua is a blue-green female otter while Marine is a pink male chipmunk. Aqua wants to be beautiful like her mother while Marine is interested in the ocean like his father. 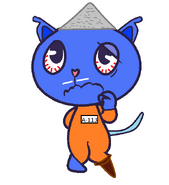 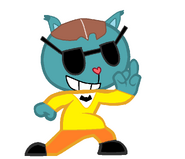 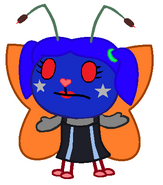 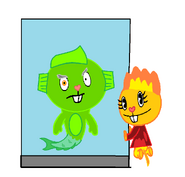 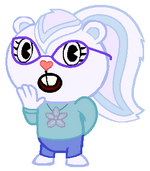 Stacy
Add a photo to this gallery

The first season will consist of 25 episodes. It was also renewed for a second season ahead of its premiere, slated to air in the fall.

Retrieved from "https://happytreefanon.fandom.com/wiki/Happy_Tree_Friends:_10_Years_Later?oldid=380286"
Community content is available under CC-BY-SA unless otherwise noted.