This is the anime version of Happy Tree Friends. You can add any info regarding this spinoff. Your characters are also welcome to participate.

There are also signs of an anime adaptation of the Happy Tree Friends series, however they maintain their animal forms and bodies. However, like the human anime adaptation, this anime version promotes more relationships among/between the Happy Tree Friends characters. Unlike the human adaptation, this version continues the excessive display of deaths, killings, murders and violence. However, this version is much more graphic with its display of the deaths to the point of any organ display borderlines, with actual organs instead of cartoon organs. Also, unlike the human adaptation, this version also promotes personal battles between Happy Tree Friends characters. The most popular battle is Flippy/Fliqpy vs Splendid. This anime version also promotes Splendid vs Splendont and Flippy/Fliqpy and Splendid vs Splendont. This anime version, like the human adaptation, supports but has a conflict over the Flippy/Flaky relationships, as this one also has disputes on Flaky's age. Also, this version has escalated Fliqpy's killing method from simple, quick killing to being partial torture and games fueled by his sick sense of humor. However, Fliqpy has now gained a sense of care for Flaky as he has to not kill her, protect her, and to not leave her side. This version also promotes more interest in Mole who has recently increased his spy activites as of late. One noted anime adaptation of the Happy Tree Friends series is the anime doujin HTH: Happy Tree High, drawn by Chama.

Note: All characters can participate if you want. 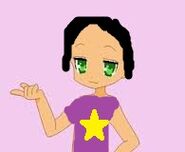 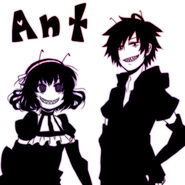 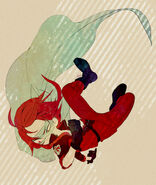 Splendont (anime style 1)
Add a photo to this gallery

How do you want to die? 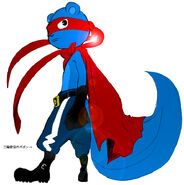 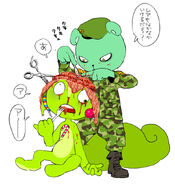 Lawn care.
Add a photo to this gallery

Giggles the Wraith
Add a photo to this gallery
Retrieved from "https://happytreefanon.fandom.com/wiki/Happy_Tree_Friends:_Anime?oldid=116867"
Community content is available under CC-BY-SA unless otherwise noted.