Hippy is a main character of Happy Tree Friends.

Hippy is a purple bear. He likes dentistry, according to writer Warren Graff. He is also shy on really rare occasions. He seems to be good friends with Cro-Marmot, yet accidentally killed him in his debut episode.

Some fans have mistaken him for being a hippy due to his name, similiar to how Meaty sometimes acts like a hippy. Despite this, he is still popular due to his many images and many roles.

Though most of his deaths are more realistic, his only deaths that can't happen in real life are Nail White Part 2, Stay A-Drive, Next-box 360 (one might die, one could survive however), Play, what's going on?, Spippy, Hippy's Garden Smoochie (all three options), Voodoo Your Buisness, and Smell of Victory. His most popular death is in We are the Camp-ions.

He is yet to have a starring role in the TV series. Kenn Navarro says that his pop-up will be jumping from side to side of a bush. Also, he is the only character who has videoclips from more than one episode in his internet season 7 intro.

His internet season 3 intro implies he likes ham sandwiches. He also owns a pet named Honey who first appeared in I Pet You Can Do This! Part 1 and also appeared in part 2. Snowie also appeared in the episode. Hippy and Honey survived both episodes.

He is the fourth character to have an ask blog. The third was Trippy, the second was Torn, and the first was Robo Star. He is sometimes busy and won't answer. However, he is still popular.

In I Know You Are, But What Am Eye?, Hippy is shown to dislike scary movies. A supporter of this shows that when blood splatters are shown on the movie, Hippy hides under a blanket, showing he may be hemophobic (afraid of blood).

He has spoken at least one clear English line in most of his episodes, such as Hello? Flaky broke her arm. in Shake your Hips, or Aw, so cute! in I Pet You Can Do This! Part 1. The only episodes where Hippy doesn't speak clear English are Stay A-Drive, Fire, Fire, Pants on Fire Part 1, Spippy, Hippy's Garden Smoochie, Idol for Minutes, Angel on the Bay, I Thaw That Coming, Frisbee Yourself, No Dogs Allowed, Elliott's Sleeping Smoochie, Apples to Grapples, and Texas Hold Em'.

Bros to the Most Episodes

Hippy got an ask blog on May 11, 2012. He is the fourth Happy Tree Friends OC to have an ask blog. The third was Trippy, the second was Torn, and the first was Robo Star. You can see the blog here.

A question hasn't been asked or answered for over 2 years - the blog had simply been forgotten and the password was later lost. 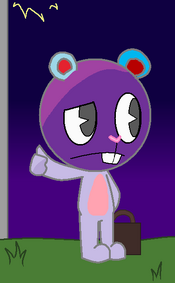 Here
Retrieved from "https://happytreefanon.fandom.com/wiki/Hippy?oldid=381276"
Community content is available under CC-BY-SA unless otherwise noted.