Horns is a fan character who is part of Creepy Cryptid Friends.

Horns is a grayish yellow demon who has two grey horns and lacks a mouth.

Horns is a timid character who wants to help others and be kind, but for one reason or another he fails and bad things happen, making look like an evil character. A common thing to happen is that Horns may stab another character with his horns on accident. Most of the other characters don't like him much to his disdain.

Due to his lack of mouth he is unable to speak, but if someone actually befriends him he is able to uses telepathy to speak with them. He is also very strong as has telekinesis. 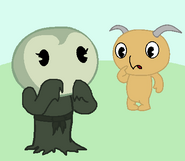 Horns actually with a mouth.

Every demon needs a hellhound.
Add a photo to this gallery
Retrieved from "https://happytreefanon.fandom.com/wiki/Horns?oldid=335874"
Community content is available under CC-BY-SA unless otherwise noted.