Start a Wiki
Hound is a HTFF character.

Hound is a brick-red basset hound with black markings who wears a police uniform. As his looks imply, Hound is a police officer and is often used to find criminals by following their scent, thanks to his great sense of smell. Although his sense of smell usually helps him, it's also a downside when he comes across bad smells, or bad smelling characters like Fungus. When he encounters a bad smell, Hound will lose track of anything else and run from the source.

When he's not on the trail of a criminal, Hound is actually very nice and enjoys the company of others. He can even be seen letting children ride on his back. However once he is on the trail of a criminal, he becomes stiff and focused until he catches the criminal or he encounters a bad smell. Hound also hates Splendid, believing he is a nuisance and only gets in the way. 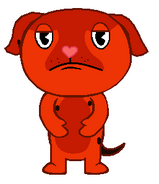 Hound without his uniform. 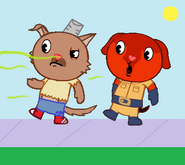 Hound and Tromp following a scent 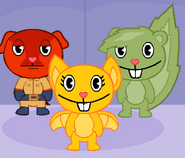 Hound is dealing with a stinky culprit
Add a photo to this gallery
Retrieved from "https://happytreefanon.fandom.com/wiki/Hound?oldid=380616"
Community content is available under CC-BY-SA unless otherwise noted.