Don't get into their trouble

Cube Rooting
Jake and Jet Haste are characters of HTFF.

Jake and Jet are green Banded Mongooses who are troublesome identical twins. Both of them have almost similar appearance except for their markings. Jake has four stripes meanwhile Jet only has three on his back but more stripes on his tail.

Both Jake and Jet are actually being hyperactive and naughty twins. It's very rare to see both of them separated as they always and wanted to be together in one place. They care and loyal toward each other and also sharing though(most of the times) even though they always get into a sibling fight.

They commonly brings some troubles over a small thing as how naughty they were, especially when they're together. They both love pranks but they not usually do it in common. They try to make something fun that can keep them away from being bored.

Even though Jake and Jet almost have the same personality, Jake appears to be more naughty and rude than Jet meanwhile Jet is actually a very adventurous and quick one. Both of them appears to be unintelligent but not very stupid. When something goes wrong, they never admit it's their problems and might blame each other.

If they're separated (which is rarely happens), they will try to find each other no matter what's happened. Their ideas can be the same. If not, they might argue about it or fight. They're not pranksters, but their hyperactive and naughty personality can be the great problems in the scene. Their aggressiveness can brings injuries or even deaths toward anyone around them, and they most likely will not aware of it, unless one of them died. 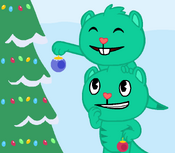