Start a Wiki
Josh is a fanon character of HTF.

Josh is a grey chipmunk who sports a blue cap with SPACE on it and glasses due to shortsightedness. He wears a blue shirt which originally had Saturn on it, but since Love Hurts, the shirt would have ART written on it. He would also have his cap on backwards, revealing a fringe of brown hair.

He lives next door to his best friend and lab partner Sniffles. He has a high IQ (not as high as Sniffles) and does well at his school. His favourite subjects are Science, History and Art.

He likes to draw pictures of some things he likes (Biplanes, planets and even himself). He dislikes wasps, lightning and needles. His most torturous and traumatic death was when he was mangled by a shark when he went diving.

One of his greatest achievements was when he made a patio sized picture of an ambulance before his hospital appointment. That was due to him being bored. He has been making big pictures since then. Most embarrasingly, he made a picture of himself showering at a spa.

Sometimes, making big pictures would then lead his friends to an unfortunate fate. Like his lover Petunia, Josh has OCD but that is for art, not cleaning. He is very protective of his artwork. Every time he sees one of his paintings or big pictures ruined, he either hyperventilates or goes crazy and starts his painting all over again or mends the big picture. Sometimes it goes out of hand and Josh goes on a mad spree. He accidentally killed Flippy once in one of his sprees by stabbing him with his own knife.

As revealed in A Clothes Call, he can flip out if angered enough. His deaths usually involve electrocution, boiling or being shredded or mauled. He used to love Petunia, also being married to her and having Genesis and Beauty. But after Together Again, Josh fell in love with Stacy. In Stacy the Mom, Josh and Stacy split up because they were seeing other people, leaving the latter in custody of two of their kids. As of Josh's Little Helpers, Josh is currently in custody of Genesis and Beauty.

He has his own spin-off series known as Josh's Big Picture Showcase.

Zero, a shadowed competent superhero who first appeared in Running in a Shadow and later made his final appearances in the 4-part episode Identified Flying Object, was later revealed to be Josh, due to the results of the WIZ (Who is Zero) poll. 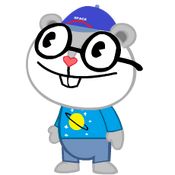 Retrieved from "https://happytreefanon.fandom.com/wiki/Josh?oldid=370524"
Community content is available under CC-BY-SA unless otherwise noted.