She is just a lonely one and trying to find some friends.

We're On Your Tide

Kelpy is a character of Creepy Cryptid Friends.

Kelpy is a dark green water kelpie who can shapeshifting into a figure and normal equine. Since she lives inside the lake, Kelpy is covered with kelp, which also her hair. Her other eyes barely seen as it covered by her "hair".

As a normal horse, she is white with long blonde hair and blue eyes. She also has typical equine ears and a tail.

Kelpy is lives alone at the abandoned lake inside the forest and appears wanted to find someone who could join her over. She rather calm and quiet in most of the time. She also spends her time inside her lake playing with kelps and search something buried underwater that can be playing around.

Since she is a water kelpie, Kelpy would shapeshifting into a beautiful figure to attracts someone to join her. She rarely go outside of the forest. If she does, she turns into the normal horse and try to find some friends. Her shapeshifting can't hold for a long time before she back into her real form.

On the bad side, Kelpy pretty much easily irritated and sensitive towards her look. She begin to act aggressive and would kills anyone around her. When she is hungry, she uses her ability to tricks and capture someone for her meal. Others who know her might find her very creepy and try to keep the distance from her. 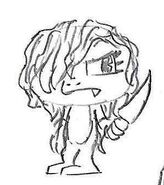 Kelpy in her other form.

In her other form again, luring another horse. 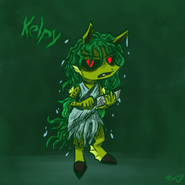 Retrieved from "https://happytreefanon.fandom.com/wiki/Kelpy?oldid=381331"
Community content is available under CC-BY-SA unless otherwise noted.